Cooking dinner is a daily act, but often comes with its own range of emotions. Sometimes we look forward to it, particularly if it’s Pastitsio Night or Fish and Chips Friday! We get excited and dinner becomes one of the highlights of our day. But it can also feel like a grind, figuring out what to make night after night. In these instances, it is easy to take the easy route and grab some take-away. But did people from two millennia ago have the same concerns? Of course, they did. There is archaeological and literary evidence for street food and ‘fast-food’ restaurants in both ancient Greece and Rome, there is even evidence of this style of dining dating as far back as 3200 BCE in Mesopotamia!

The type of food we consume might be a bit different today, but we are essentially driven by the same desires. If you lived two millennia ago in a typical Greek or Roman city you would have a variety of options available to you, depending (of course) on your social & economic status. If you were a typical labourer or craftsman in Athens, legumes, fruit and vegetables, would have been your mainstay, along with fish and seafood if you could afford it. Meat from domesticated animals was expensive and therefore available only to the wealthy or for special occasions. If you were a Greek farmer out in the country you might whip up a few of Galen’s famous teganitai (a type of wheat pancake) for breakfast, lunch might be something light, like bread soaked in wine and some goat’s cheese. For dinner you might add some eggs, fruit and vegetables, such as olives or figs, to your bread and cheese to add some variety.

If you were wealthy, then food became less about fuel to get you through the day, and more about the experience. Both Greek and Roman recipes which have survived the intervening millennia show us how adventurous ancient people were in their culinary exploits. In an ancient cookery book by Apicius, it is explained that the Romans detested eating any sort of meat, fish or vegetable in its original form. There is hardly a single recipe which doesn’t add a sauce to change the taste of the food (Apicius, 19). Some Roman cooks would even go as far as disguise their food to look like a completely different dish or animal. For example, there are accounts of a hare made to look like a Pegasus, the winged horse from Greek myth.

After a recent successful attempt at making fish sauce called garum (which you can read about here) from an ancient recipe, we decided it was time to try our hand at cooking with garum as a main ingredient. Our museum Steward, Ben offered to experiment with the dish Pullus Farsilis (stuffed chicken) adapted from Apicius’ recipe by Sally Grainger in A Classical Cookbook

Here is Apicius’ recipe and method for Stuffed Chicken:

“Draw the chicken from the neck. Crush pepper, lovage, ginger, chopped meat, boiled emmer; crush boiled brain, break eggs in and work into a smooth mixture. Blend with fish sauce and add a little oil, whole peppercorns, plenty of pine kernels. Make up into a stuffing and stuff the chicken (or suckling pig), so that a little room is left. You can do the same with a capon. Cook, discarding the bones.”

“Peel and chop the ginger. Place the cooked brains and/or minced lamb in a food processor along with the cracked wheat, and all the other spices, herbs and liquids. Mix well; add the eggs and process again.

If you are using a boned chicken, spread out the skin on a chopping board, arranging the leg and wing pieces in their correct place.

Spread the mixture over the breast area and also into the leg and, wing cavities. Bring the skin over the stuffing and fold the edges in at each end. Turn the chicken over and rearrange the skin in a chicken shape. Secure the skin flap with a couple of stitches of kitchen string. If you are using a whole chicken, simply stuff the cavity in the normal, way.

At this stage you can either roast the bird with a little olive oil and salt and pepper: or, if you have a boned bird, youcan boil it, as a galantine is normally cooked. Wrap the galantine in muslin to hold its shape and cook for 1 ½ hours in water to which you have added a bay leaf and a stick of celery.” 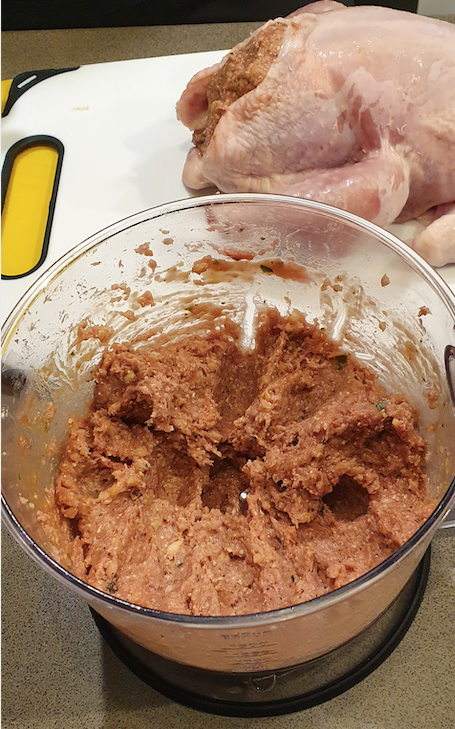 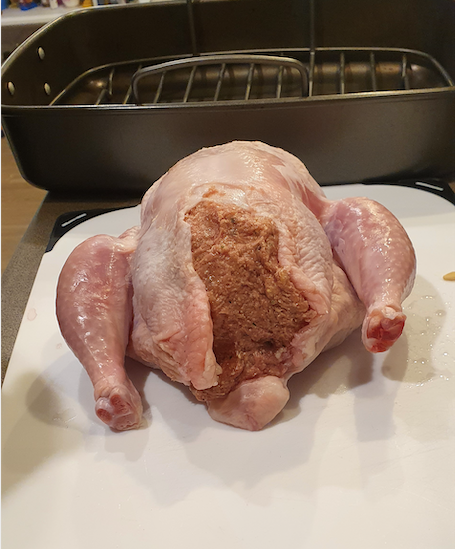 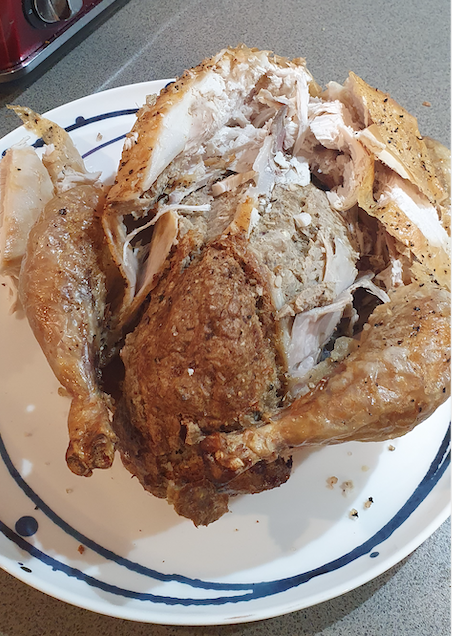 Notes from Ben on his experience:

While attempting to recreate this dish, I decided to use a whole chicken and stuff it as you normally would rather than make chicken galantine. I wanted to be as authentic as possible and use lamb brains, but my butcher needed to order them in, so I doubled the amount of lamb mince instead. The recipe was straight forward and simple to follow, and the mis-en-place took roughly 20 to 30 minutes.

Using the garum for this dish was, let’s just say, interesting. After seasoning the outside with olive oil, pepper and some salt, I put the chicken in the oven and let it cook for about 1 hour and 45 minutes. Toward the end of the cooking process, I could smell the usual fragrant aromas of roast chicken, which normally has me salivating more than Pavlov’s dogs, but the undercurrent of the salty, fishy smell of garum was disconcerting.

Once out of the oven, I let the chicken rest for 15 minutes. While it was resting, I inspected my dish and, well, I was happy with the results. It looked and (almost) smelled like any other roast chicken.

However, I quickly learned that cooking is truly an experiment. The chicken legs tasted like normal chicken, but the wings, thighs and breast were overpowered by the flavour of garum. The stuffing was surprisingly bland, with the exception of the ginger and the garum which were an assault on the senses. It definitely didn’t taste very nice. The whole dish was perplexing; how could the chicken meat have more flavour coming from the garum than the stuffing mixture itself? Maybe the minced lamb and herbs were able to mask the taste better than the chicken?

In retrospect, if I had cooked the lamb mince a bit beforehand in a frying pan and added some breadcrumbs and some more herbs like oregano and parsley (both of which were available to Classical cooks), the stuffing would have tasted more as we would expect it to today, rather than a chunk of bland, fishy, mystery meatloaf.

It was an interesting experience and it seriously made me question how people found this dish appetising. However, the whole process of experimenting with ancient recipes comes down to this simple truth, no one knows exactly how any ancient dish should taste.

(I probably used too much garum)

How to: make parchment and vellum

Angie Giannakodakis on altruism, etiquette and passion in the hospitality industry

Theseus and the Minotaur - the man the myth and the ...science

Orpheus: a lover, not a fighter

In the Hands of the Potter

Ikaria: Food and Life in the Blue Zone

Odysseus - A Man of Many Faces